If you love plants with a bit of character

The Calathea crocata Tassmania has elegant dark leaves and striking yellow-orange flowers (actually bracts) that are arranged on long, sturdy stems. The flowering is triggered by short days and usually occurs during late winter. Originally, this plant comes from the humid tropical forests of the Americas.

The Ctenanthe burle marxii is a beautiful green houseplant. It goes through a wonderful transformation every day, where its lovely patterned leaves close up to reveal the purple underside. The Fishbone prayer plant is a green houseplant that truly steals the show thanks to the special pattern on its leaves. At night, this houseplant closes its leaves like praying hands (hence the nickname 'prayer plant'), revealing its dark purple underside. A houseplant with two faces!

The Dionaea or Venus Flytrap decorates many rooms. It owes its name and popularity to its otherworldly appearance. Thanks to its trap leaves, which close when an insect comes into contact with them, this plant reverses nature’s roles. Instead of being eaten, this plant actually eats flesh itself!
This fascinating plant is especially popular with children.
But don't panic; children are not on this plant's menu!

The Ctenanthe Amagris is known for its grey-green coloured leaves with dark green stripes and an aubergine coloured underside. Because the plant does a lot of “dancing”, it does like a sip of water, so make sure to keep the soil slightly moist. But be careful not to give it too much water, as it hates having cold feet!

The Epiphyllum anguliger is a very easy houseplant to keep. The Epiphyllum is also known as the Fishbone Cactus or Zig Zag Cactus because of the unusual zigzag shape of its leaves. The Epiphyllum belongs to the Cactaceae (cactus family) and is native to Mexico, parts of America and the Caribbean. In its natural habitat, the cactus actually grows on other living plants and trees.

This Calathea Fusion White is part of the Prayer plants family. With its beautiful foliage, it makes a lovely centrepiece in any living room or (larger) terrarium. This plant thrives in a humid environment. The leaves are multi-coloured, ranging from dark green to light pink.

The Calathea Fusion Yellow is an unusual houseplant, and very similar to the Calathea Fusion White. You guessed it, the variegation (the colour difference) in the leaves is yellow instead of white. The long leaves are coloured from yellow to light green, with a ridged outline and beautiful, dark green stripes across the leaf. The back of the leaf is purple, giving it a lovely contrast!

In the wild, this plant is mainly found in the tropics of South America, where it grows in the shade of other trees and plants. The Calathea likes a shady spot, which is why it is also known as a 'shadow plant'. Researchers think that Calatheas unfold their leaves during the day so they can catch more light. At night, they are thought to close them up again so that their growth rhythm is not disturbed by the light of the moon. So if you hear something rustling at night, it may very well be the sound of the closing leaves!

The Ceropegia woodii is also known as 'string of hearts', which is the perfect way to describe the Ceropegia. This hanging plant has long vines with heart-shaped leaves, which grow quickly and can easily reach up to a metre in length! The leaves have a purple underside and a beautiful grey-green pattern on top. A charming little plant that will suit virtually any interior. Place the String of Hearts on the edge of a cabinet or in a hanging pot to allow the vines to beautifully dangle downwards.

We are Ronald and Rob van der Knaap, and we have been the enthusiastic owners of Kwekerij Tass since 2005.

We started growing peppers in 1997, but over time we realised that this was no longer giving us the satisfaction we were looking for. So it was time to try out something new.

We came across Kwekerij Tass, which was still located in Den Hoorn at the time. After spending two years learning the tricks of the trade, we were finally ready to take over in 2005.

Curious about what we have been up to since then? We have made a short summary just for you. 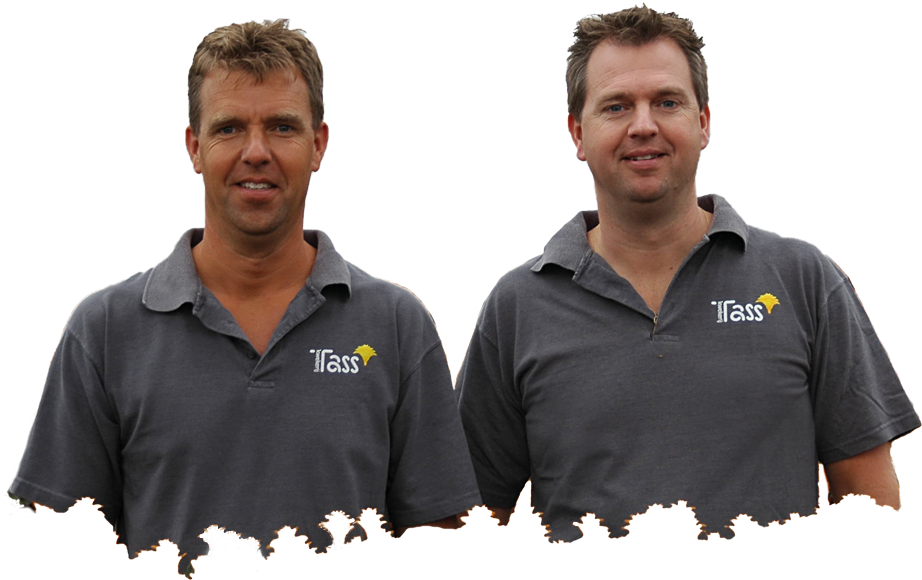